History and getting around Carriacou 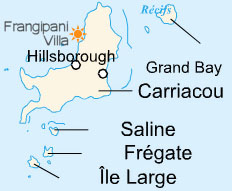 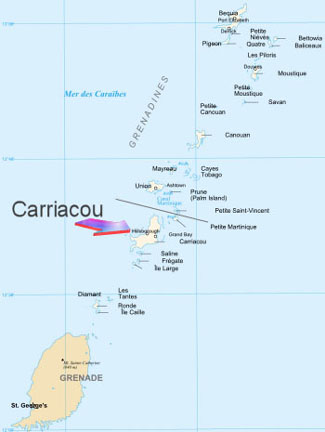 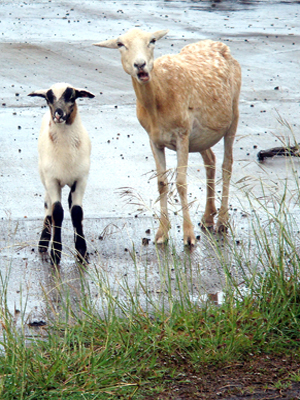 Carriacou is the most southerly of the Grenadines, situated 20 miles north of Grenada, latitude 12.5 degrees. It has an area of 13 square miles and is the largest of the chain of islands between Grenada and St. Vincent. The first settlers, the Amerindians appropriately referred to Carriacou as the 'Land of Reefs'.

History: Carriacou was settled by the French, though in 1763 was ceded with Grenada to the British. The majority of the inhabitants today are of African descent, with the influence in the island mainly British, such as driving on the left, though French names are still noticed, especially in the L'Esterre area. The village of Windward is home to the descendent of a group of Scottish boat builders who settled here in the 19th century. The Scottish names and boatbuilding skills have been passed down through the generations. Many locally built boats from small fishing sloops to large trading schooners are seen in the Carriacou waters.

Culture: Carriacou is rich in cultural history and has as part of its legacy the Big Drum and Quadrille dances. Before the arrival of Europeans, Grenada was inhabited by Carib Indians who had driven the more peaceful Arawaks from the island. Columbus landed on Grenada in 1498 during his third voyage to the new world. He named the island "Concepcion." The origin of the name "Grenada" is obscure but it is likely that Spanish sailors renamed the island for the city of Granada. By the beginning of the 18th century, the name "Grenada," or "la Grenade" in French, was in common use. Partly because of the Carib Indians, Grenada remained uncolonized for more than 100 years after its discovery; early English efforts to settle the island were unsuccessful. In 1650, a French company founded by Cardinal Richelieu purchased Grenada from the English and established a small settlement. After several skirmishes with the Caribs, the French brought in reinforcements from Martinique and defeated the Caribs, the last of whom leaped into the sea rather than surrender. The island remained under French control until its capture by the British in 1762, during the Seven Years' War. Grenada was formally ceded to Great Britain in 1763 by the Treaty of Paris. Although the French regained control in 1779, the island was restored to Britain in 1783 by the Treaty of Versailles.

Although Britain was hard pressed to overcome a pro-French revolt in 1795, Grenada remained British for the remainder of the colonial period. During the 18th century, Grenada's economy underwent an important transition. Like much of the rest of the West Indies, it was originally settled to cultivate sugar, which was grown on estates using slave labor.

Agriculture: In 1782, Sir Joseph Banks, the botanical adviser to King George III, introduced nutmeg to Grenada. The island's soil was ideal for growing the spice, and, because Grenada was a closer source of spices for Europe than the Dutch East Indies, the island assumed a new importance to European traders. Carriacou produced mostly cotton with some sugar, limes, coffee and cocoa. Today the inhabitants grow corn and pigeon peas for their own consumption and subsistence farming, live stock rearing, fishing and seafaring form the main occupations. The collapse of the sugar estates and the introduction of nutmeg and cocoa encouraged the development of smaller land holdings and the island developed a land-owning yeoman farmer class.

Slavery: Outlawed in 1834. In 1833, Grenada became part of the British Windward Islands Administration. The governor of the Windward Islands administered the island for the rest of the colonial period. In 1958, the Windward Islands Administration was dissolved, and Grenada joined the Federation of the West Indies. After that federation collapsed in 1962, the British Government tried to form a small federation out of its remaining dependencies in the Eastern Caribbean. Following the failure of this second effort, the British and the islands developed the concept of associated statehood. Under the Associated Statehood Act of 1967, Grenada was granted full autonomy over its internal affairs in March 1967. Full independence was granted on February 7, 1974. After obtaining independence, Grenada adopted a modified Westminster parliamentary system based on the British model, with a governor general appointed by and representing the British monarch (head of state) and a prime minister who is both leader of the majority party and the head of government.

Independence: Sir Eric Gary was Grenada's first prime minister as an independant state. On March 13, 1979, the new joint endeavor for welfare, education, and liberation (New Jewel) movement ousted Gairy in a nearly bloodless coup and established a people's revolutionary government (PRG), headed by Maurice Bishop who became prime minister. is Marxist-Leninist Government established close ties with Cuba, the Soviet Union, and other communist-bloc countries. In October 1983, a power struggle within the government resulted in the arrest and subsequent murder of Bishop and several members of his cabinet by elements of the people's revolutionary army. Following a breakdown in civil order, a U.S.-Caribbean force landed on Grenada on October 25 in response to an appeal from the governor general and to a request for assistance from the Organization of Eastern Caribbean States. U.S. citizens were evacuated, and order was restored. An advisory council, named by the governor general, administered the country until general elections were held in December 1984.

Language: English; though some local patois derived from French and African languages may be heard.

Currency: The eastern Caribbean dollar (EC$) is the official currency. It is tied to the us dollar at approx. us$1.00 = EC$2.68. US-Dollars are widely accepted.

Banking: There are two banks on Carriacou namely, First Caribbean International Bank and Republic Bank. Both banks will exchange money, cash Travelers' Checks and all have ATM machines.

Communications: International direct dial or credit card charged calls are available. You can purchase an IP card for internet access or there are several Internet Cafe's in Hillsborough. Any cell phone and/or personal communication device that is quad band will be able to access the local GSM network.

Temperature: the year round average is in the low to mid eighties (80-85F; 27-32C).The sea is always warm for swimming.

Seasons: the dry season usually runs from January to May. The rainy season, or locally called “green season”, arrives in patches throughout the other months, though prolonged rain is unusual. Hurricanes can occur in the Caribbean between June and October, but are rare in the Grenadines.

Health: Carriacou has in residence a total of five physicians though only Carriacou Health Services has in residence a US Board Certified Physician. Carriacou Health Service is a State of the Art Health Center for the use and benefit of the people of Grenada, Carriacou, Petite Martinique, The Grenadines, and Worldwide. The center provides world class medical services to the citizens of Grenada, Carriacou and Petite Martinique, it serves as a source of advanced training and continuing medical education for Physicians, Nurses, and other Health Professionals from the Caribbean, the United States of America, the United Kingdom. A special emphasis is given to patient education and for CHS to serve as a base for the introduction of new medical techniques to the Caribbean. Services offered include adult, pediatric and ob/gyn services, prenatal care and delivery, laboratory services, X-ray and mammography services and colonoscopy services.

Clothing: Light casual clothes are the norm. Swimsuits or brief beachwear worn around the town might offend local people.

Churches: The principal churches are Catholic and Anglican, both located in Hillsborough. Several other denominations, seventh day Adventist, Mormon, and evangelists also have small churches on the island.